The Mamiya RB67 is a Beast

At the end of the Second World War, the cover of an American comic depicted a female Army photographer named Linda Lens hitting a German soldier knock out with a Kodak Medalist on a strap.

Impressive for sure but to make a real impression (on a soldier's helmet or elsewhere), I'd advise the Mamiya RB67.

Its users often refer to it as 'The Beast' in their arsenal of cameras. It dwarves many other cameras with its appearance, even the majority of medium format cameras. It is too hefty to shoot handheld (at least, I feel it is) and while ergonomics allow you to adjust all its settings and forward the film with just your right hand, sooner or later you want to relax that left arm so you won't tear the biceps...

So, why are people even considering these cameras at all? Why not a (much lighter) Hasselblad or Rolleiflex? And certainly a Pentax 67 would be easier to handle since it's much more SLR-resembling?

A short fly-by on the perks of the Mamiya RB67:

How about film sizes?

The RB67 is dedicated for (drum roll!) 6x7 aspect ratio shots. But you are in luck if you want to shoot a 6x4.5 back, those were also made by Mamiya for the RB67 although they are a bit harder to find. But, since the back's architecture is pretty similar to a Graflok model, there is a number of backs from other manufacturers that will fit too, most notably the relatively cheap Graflex Singer backs that also come in 6x6 size. Shooting either of those would require you to draw a mask on the ground glass yourself. And, to top it all off, there are Mamiya-made 6x8 backs that specifically fit the latest Pro-SD model. But, they are hard to find and usually aren't that cheap.

All the above mentioned sizes are available in both 120 film and 220 film backs. The designated RB67 backs are set up for both 120 and 220 anyway since they only require changing the pressure plate for the appropriate film type. Switching the pressure plate out will also set the film counter to the correct amount of frames. For 6x6 backs, it's manufacturer specific so I cannot comment.

A final word on the backs, the Horseman backs (very common) unfortunately do not fit the RB67. The Graflex Singer backs are your best bet since they are the most universal model out there. 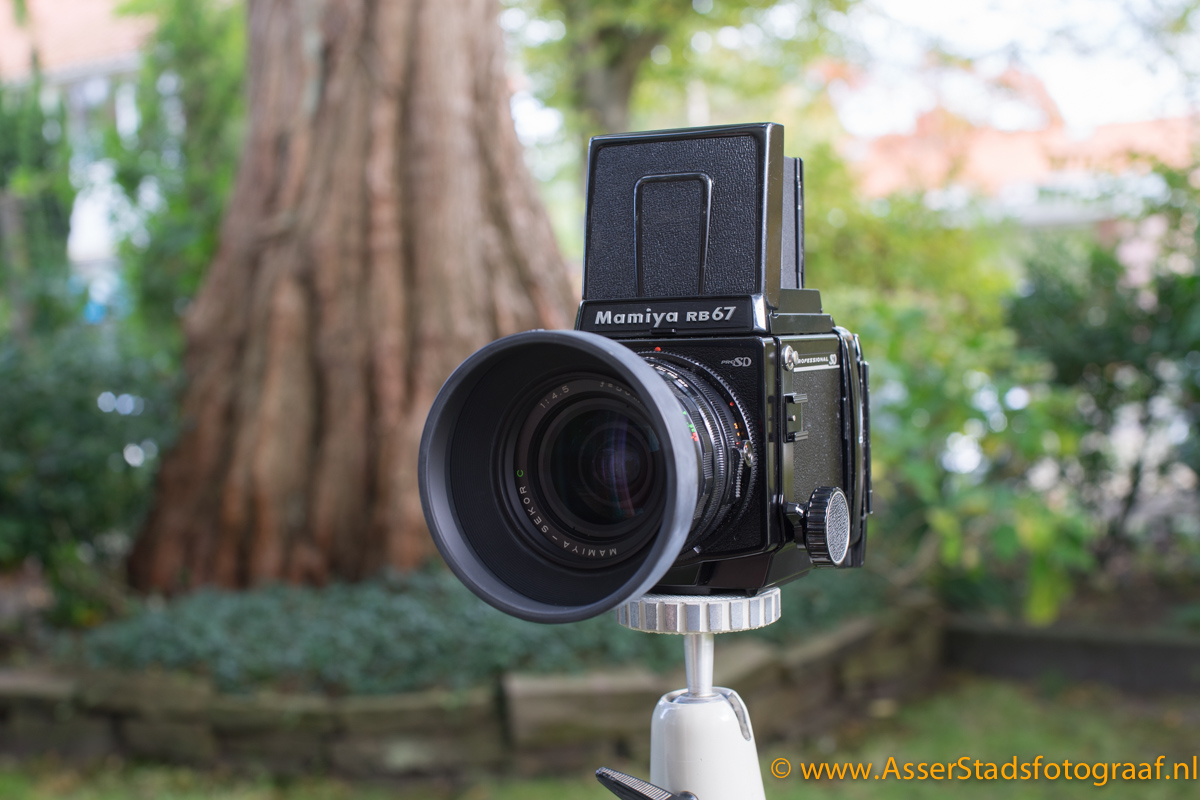 This picture shows the Mamiya RB67 Pro-SD with the wide angle lens on it, the 50mm 4.5 Mamiya Sekor.

On my RB67 Pro-SD I use the motorized backs since they came with the camera and I never bothered to buy regular ones.

But, the battery unit to power the back never leaves the case...

Getting an old RB67, how should I test it?

Since the RB67s are abundant and have been made for a long time, the cameras sometimes pop up for ridiculously low prices. But, how to check them for functionality?

First, it's a simple modular camera but it has a few features that prevent you from messing the camera or your film up. It's best to check it part by part but the parts do not separate without some knowledge of how to do it. Sit yourself down at a table, for safety.

You completed part I already!

One more part to check, home base coming up!

That's it! Easy to do once you've done it a few times.

If all your tests are satisfactory, there's the issue of the light seals. It might be a reason to reduce the price since you need to get a set of new light seals from Jon Goodman. Yes, there's also seals from a supplier in Japan online but they show the wrong images for installing the light seals in the film back (and have done so for a long time), and the film seals for the RB67 you find on eBay are of lesser quality. So Jon's seals it is.

His e-mail is here:

Note: Ask Jon for all 3 kits for the RB67: the Mirror kit, the Rotating back kit and the Film back. Remember to specify 120 or 220 back. If you happen to have a 120 back in 6x4.5 format it will be the same as a standard 6x7 back. His seals are good, reasonably priced, come fast and have instructions that are so easy that only a ham-fisted gorilla will be unable to install those seals.

If you need help loading the film in the camera, there's a couple of videos at the bottom of this article that can help you out. 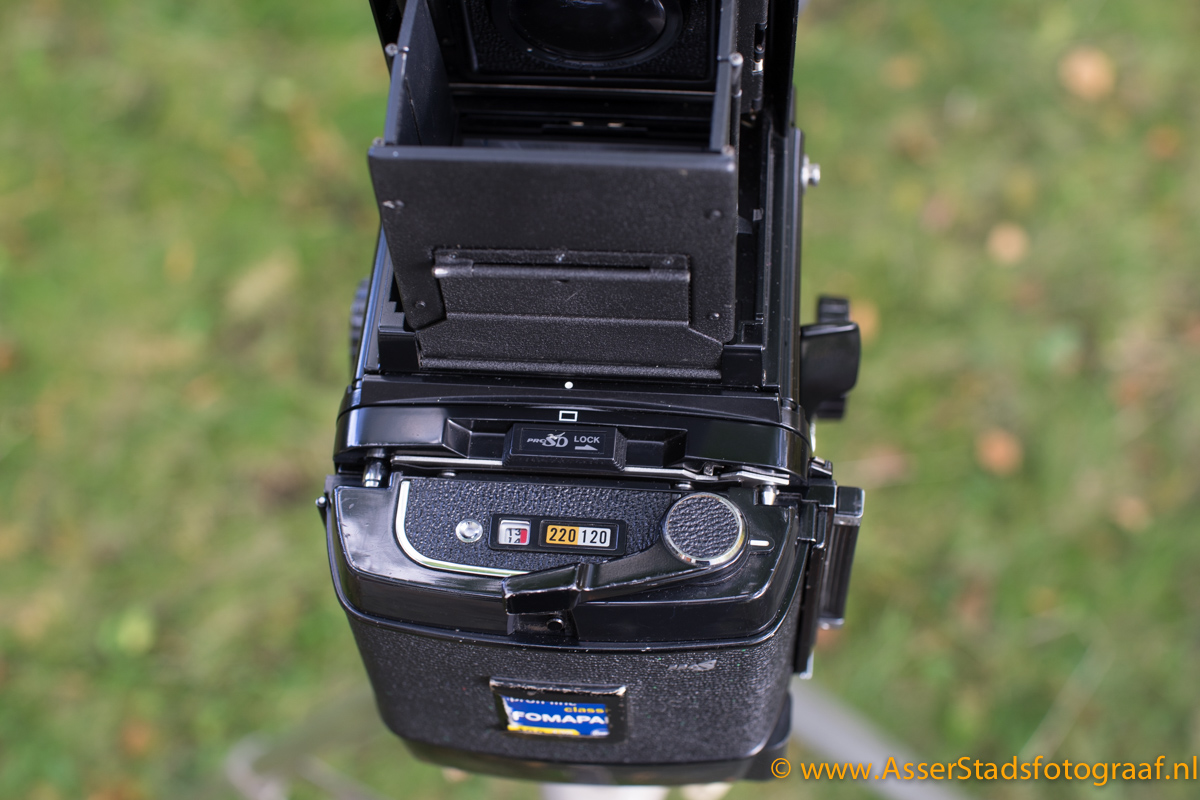 the backs have a frame counter that enables both the 120 and the 220 film length.

But when the 120 film pressure plate is installed, the counter mechanism disengages after frame 10.

So yes it's a nice camera. And you know you want one. But, it's just too heavy to lug around and just show off, you need to actually make pictures with it to receive the awe and compliments of the folks you wanna impress shooting it... That's why I'm showing you some of the images I made with it. And no, I'm not going to reveal my secret-sauce process for the double exposure images you see below. Rest assured, the camera is also very capable of making non-double exposures... 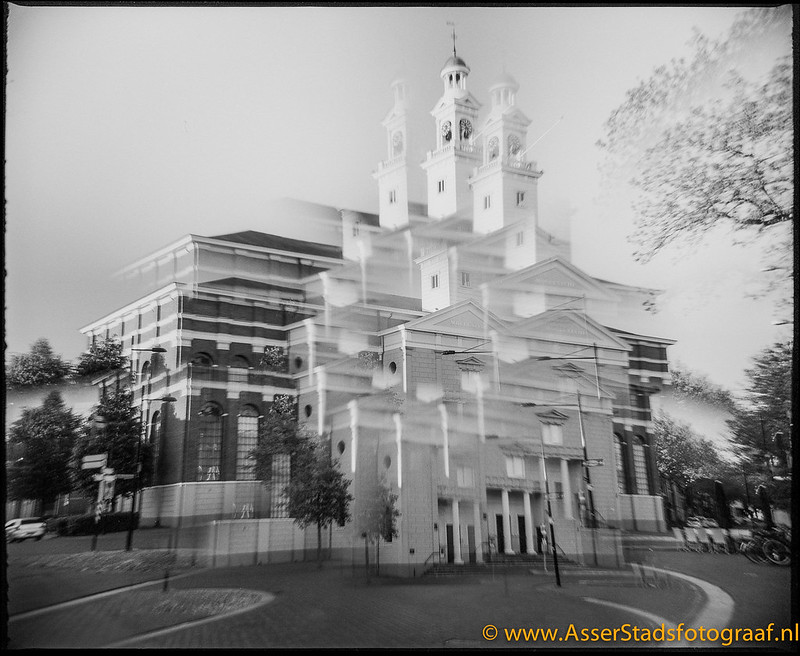 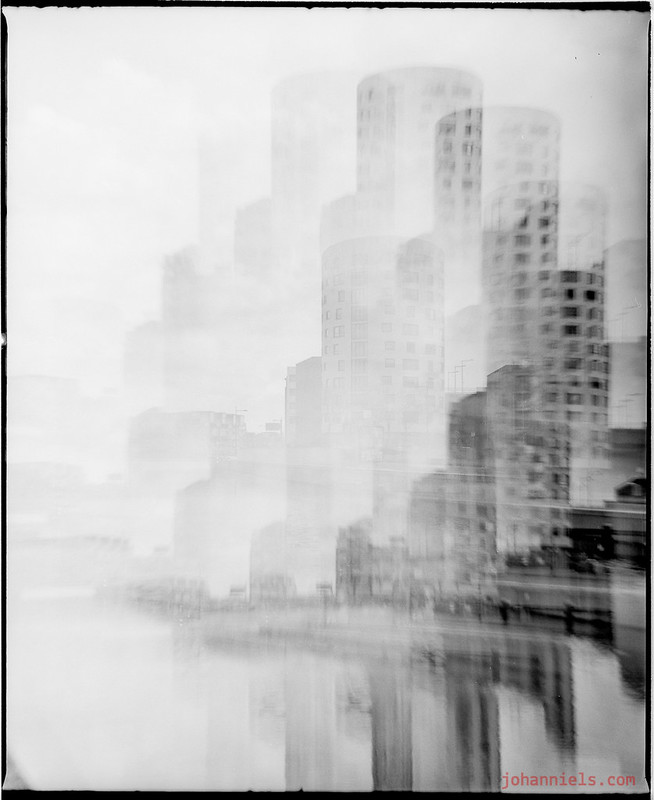 Another article, on a rather tatty-looking RB67 Pro-S

Introduction to the camera:

How to load the film into an RB67: