The Ricoh Caddy half frame camera is quite a handful 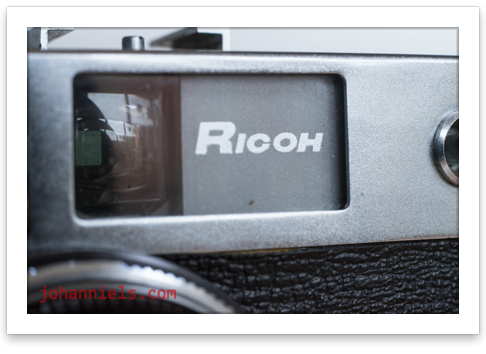 The Ricoh Caddy was Ricoh's most accomplished half frame camera ever. Not that they built so many, but they got it right pretty quick. It has full manual settings, a Tomioka lens and the ergonomics are truly excellent. And to boot, it fits in your jeans pocket. Although it should be treated with a bit more respect because of what it is and what it delivers!

I mean, come on what can you expect of a flat, boxy little camera with a weensy little lens like that? It does not even have a focusing system, it's a plain zone focus! Any halfway decent camera has a focusing system that surpasses 'estimate the distance', zone focusing is for folks who are too dumb to figure anything out that goes beyond guessing!

And that selenium cell on the front is probably dead anyway, since they all die because of old age! You gotta be kidding, how old is that thing anyway? 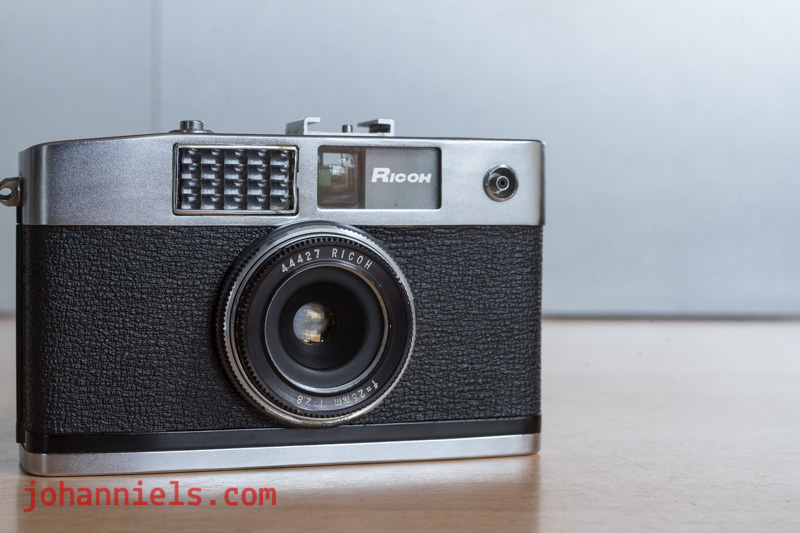 Nope, wrong. First of all, those selenium cells don't just die of old age, they mostly die from moisture. How so, you ask? The minerals that are used in them, attract moisture from the air if they aren't sufficiently sealed. And it's true that most of the cells aren't sealed as much as they could have been. But in their defence, manufacturers never meant those meters and cameras to survive the ages, or they would not sell a camera ever again! On this particular camera, the meter was sealed sufficiently and the meter still works. And it also has a nifty read-out that I'll show and explain further on.

Then, there's the itsy-bitsy little lens. 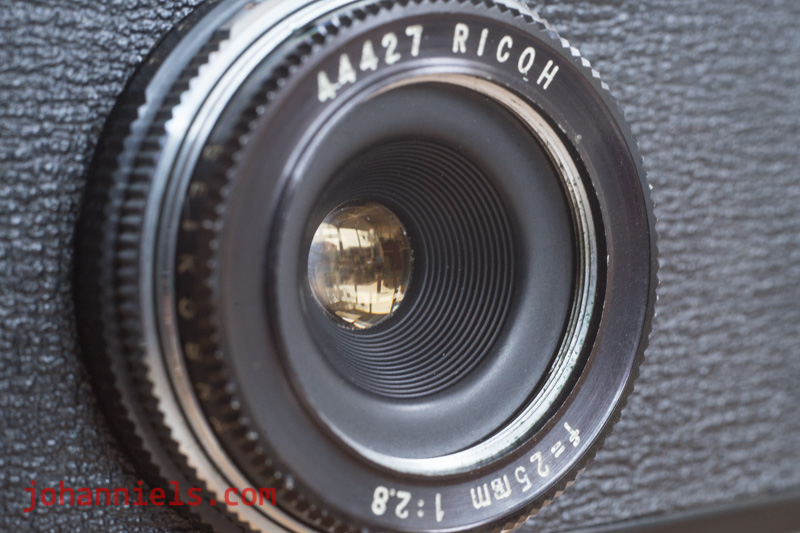 Those in the know of camera and lens history might already have spotted that signature 1960s light whiskey-colored coating that is a trademark of the Tomioka factory in that era. Yup, the lens on this 1961-released camera is Tomioka-manufactured and coated! The lens is a whopping 2.8 wide open and as such, is excellent for those lower light situations. Also, the 25mm in a half frame amounts to about a 35mm angle of view in a full frame camera, which is pretty awesome! Of course, you need to tilt the camera to its side to shoot an image in landscape mode but hey, it's not like it's big or heavy when you do so... haha!

Now, back in the day Tomioka was just another Japanese lens manufacturer and their name certainly did not inspire any Oohs and Aahs. But, time has proven the Tomioka lenses to be very sharp, and very durable as well. Many of them have aged pretty good and although there is no scientific data to back me up, it seems there are less fungus-infested lenses that were coated by Tomioka than there are lenses from other brands from that era. But, maybe those other brands got discarded a bit more often since they weren't Tomioka, who knows...

The lens even has a filter ring, but I'm not sure what size it is (haven't measured it yet) nor would I have any suggestions about what filter you'd want to use on it, maybe a yellow filter for B&W film?

Then, there's the fact that this camera has an actual focus ring (which is very! small and narrow) that does have a few 'stops' on it but allows you to set the focus very precisely. Not anything like all the fifties and sixties and seventies compacts that show four little symbols and require you to pick any of them. All green markings on the focus ring have click stops but any other distance can be set with great precision.

To get the zone focusing 'issue' into perspective (har har), if I set the focus to 2 meters and the lens to 2.8 wide open, the focus depth is already 73 cms according to this brilliant website Points in Focus. Which means that you'd have to be legally blind to not get anything in focus with this camera when setting it to most used distances. Setting it to 5 meters gets you a depth of focus that ranges from 3.5 meters to 9 meters.

And stopping the lens down increases the depth of focus, at 5.6 and 5 meters, anything between 2.6 meters and 46 meters(!) is reasonably sharp. 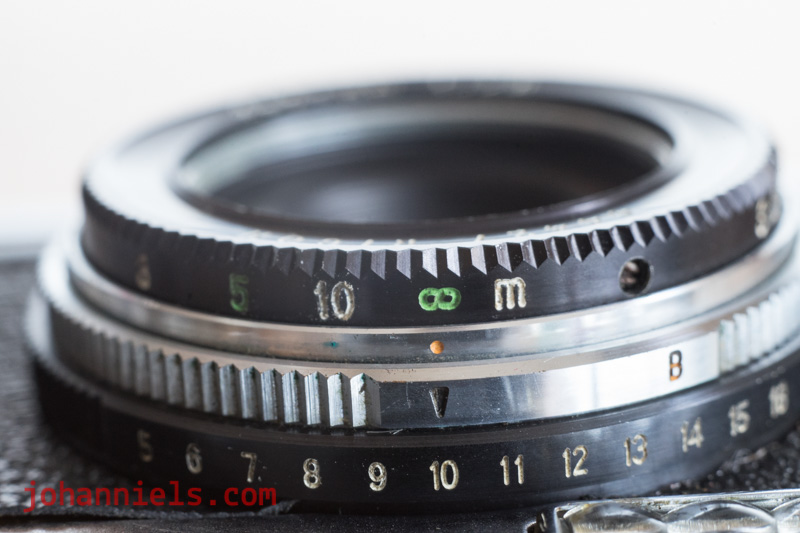 See those numbers in white on the bottom black ring? Those numbers signal the dreaded-by-many Exposure Value system. Which is quite a useful system once you learn to understand and use it but that's a whole different story.

The meter is on the top of the camera, and it has a moving needle that is powered by the selenium cell on the front. Point it toward a source of light, and the meter will move. In the picture below, the readout for 100 ASA film is selected, and once the meter indicates an EV number, just select that on the ring around the lens and you'll be good to go. The meter goes from 12 ASA to 400 ASA. I'm very happy with that, given the fact that I usually set my film speeds to half of what is indicated by the manufacturer, since color film is much better with overexposure than it is with underexposure. So 400 ASA gets me the opportunity to shoot 800 ASA film and I'm not even sure where to get that for a decent price...

And that release button is even threaded for a cable release, would you believe it! 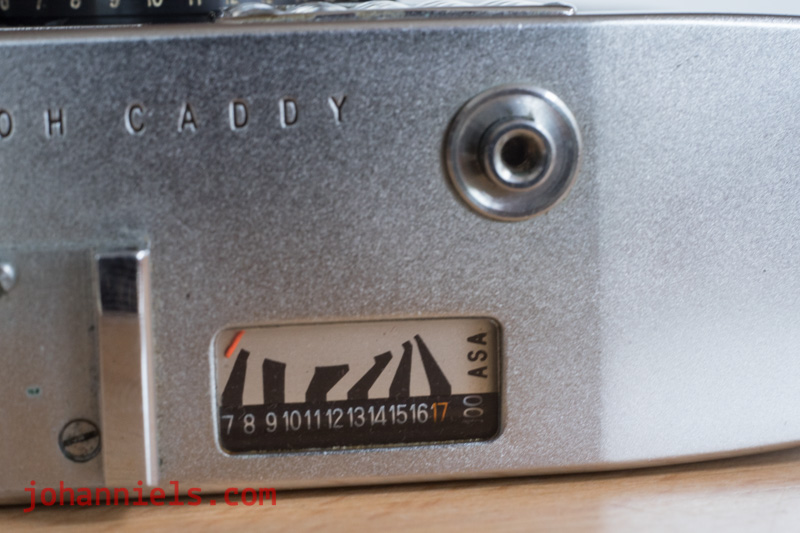 To set the meter to the correct scale, there's a very! minute little dial on the back. My thumb looks like I was Gulliver, operating a midget camera! 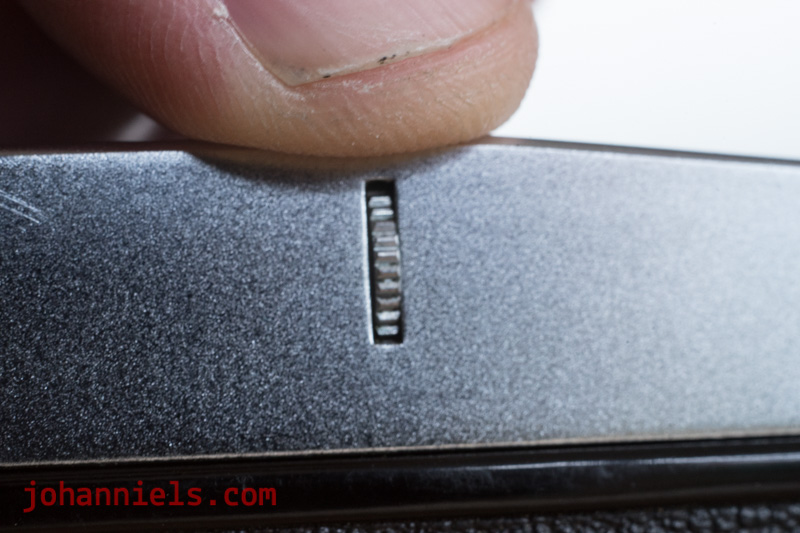 So, set the camera's meter to the correct scale, point the camera towards the subject you want to photograph (or in the general direction) and read the meter scale. Apply that number to the EV indicator on the lens, and you'll be good to go!

For now, just remember that once you set the correct exposure value on the ring and you wonder what it is you actually just set the camera to, you simply need to turn the little miracle on its head to know that, since there are two rings on the bottom that show the combination of shutter speed and aperture you just chose on the top side!

The ring on my camera is quite corroded but it still functions fine, and it's in fact one of only a few cosmetic flaws this little 1961 half frame miracle has... This little ring also ensures you can still shoot the camera if the meter on yours is not working since the selenium cell has died. You see, the camera is fully mechanical and the selenium cell only powers the meter. The combination of shutter speed and aperture can be obtained with any handheld meter (or an exposure meter app on you smart phone) and entered into the camera.

Next, where'd they hide the film advance lever? Well, there isn't one. And no, it's not using a battery-powered motorwind either. It has a small thumb wheel on the bottom right hand side of the camera's back. Which is a very ergonomic place for it given that it's a very small camera. It advances the film a full half frame (see what I said there?) with a single movement. I place my thumb below the joint on the wheel and move it right to the tip of my thumb and the film will have advanced a single frame. I'm pretty confident that this is as quick as a triggerwind camera like the Canon rangefinder (what was the triggerwind model again?) or a Leica IIIa with a SCNOO triggerwinder. 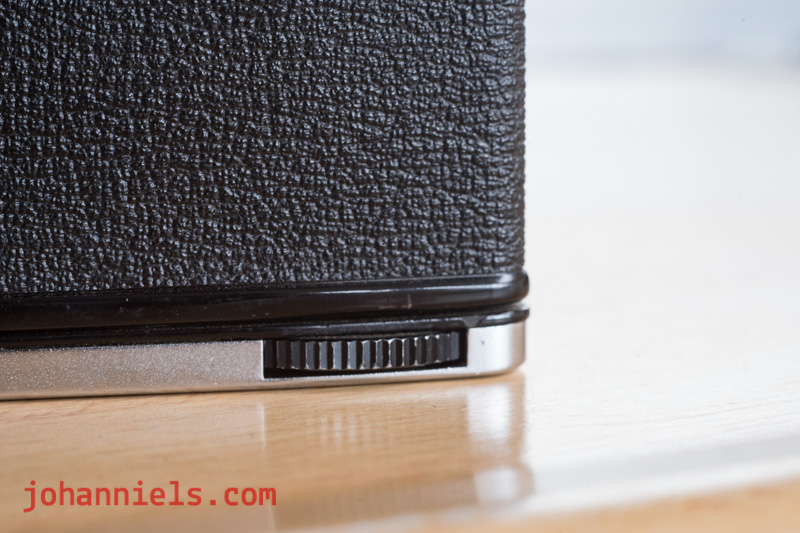 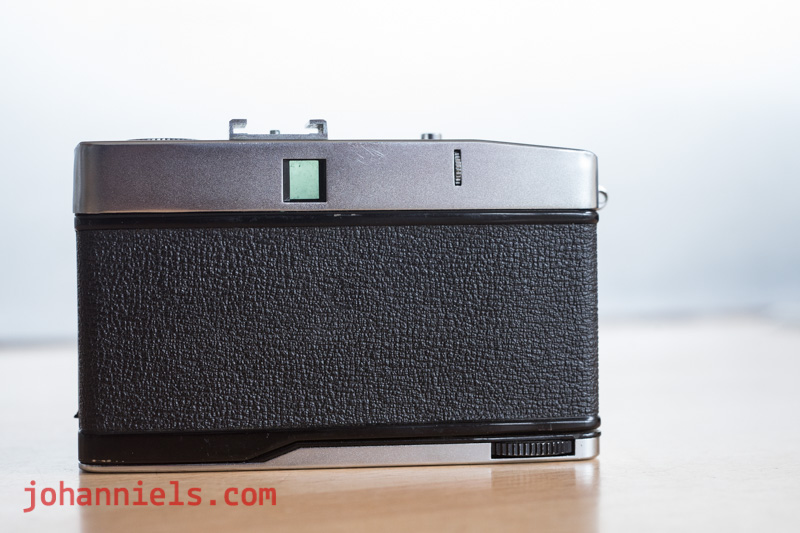 The green viewfinder is very nice and enhances contrast of the image a bit. It shows the yellow brightlines of the frame very good. Mine could use a clean but I don't dare take the top off the camera due to the meter... Cosmetic flaw nr.2 is the minute dent on the right hand side, pretty decent condition after 57 years, I'd say. 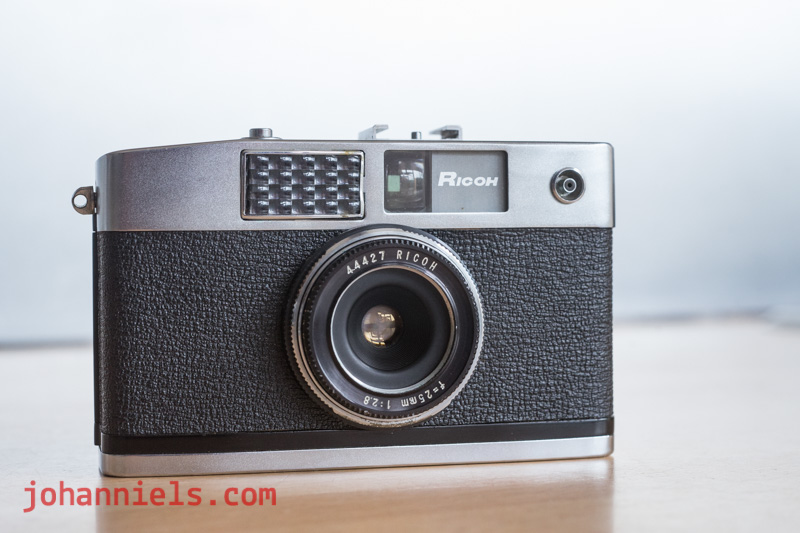 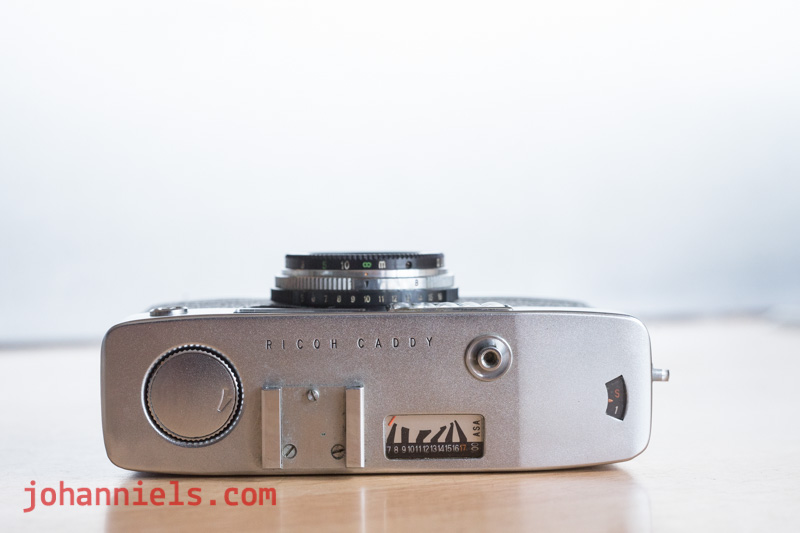 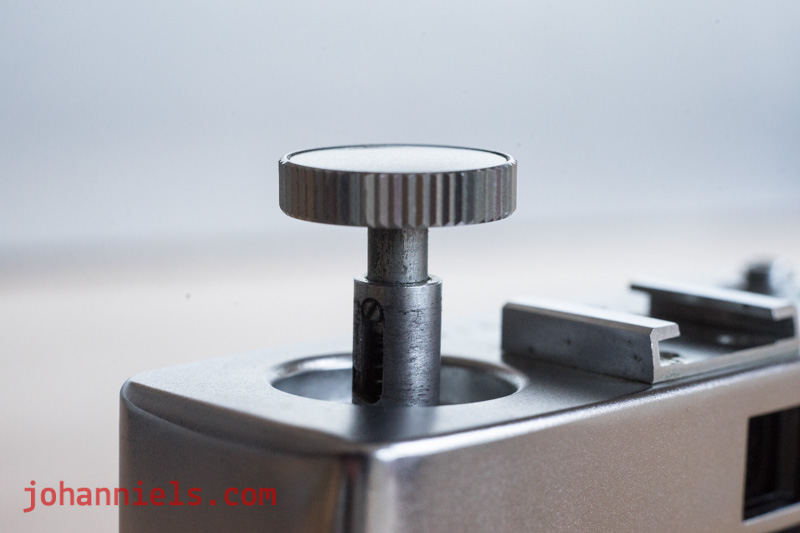 That little camera has a very convenient rewind screw, which pops up when you push down on it and counter-clockwise rotate it. Pretty unbelievable for such a small camera, and very useful!

The leather case came with the camera. It was in very good condition, but not as good as I'm showing it in here. I did a little work to it to get it in this good a state, and I'll be writing an article on general care of vintage cameras that this little case will be featured in soon. 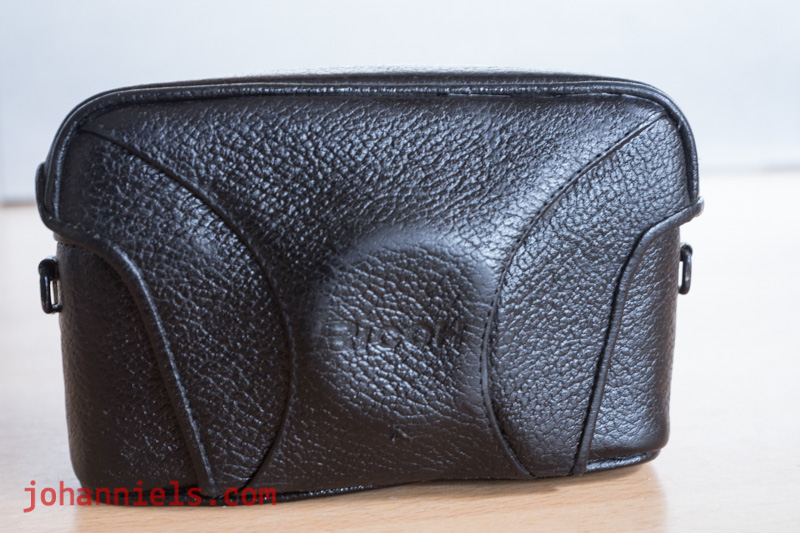 This is what Camerapedia says on the Ricoh Caddy:

I also found you a video on the Ricoh Caddy:

Just saw that the wrist strap I thought wasn't original to my camera, is identical to the one on this guy's camera.

Seems I might want to dig it up from the tidbits box I tossed it in to!