On the net you can find all kinds of stories on this lens. Most say its very soft wide open, prone to flare and what else. But most of the time this is merely a side effect from shooting a 50+ year old lens that has gotten hazy inside. Most of these lenses have scratches in the front element coating, which cannot be remedied with this pictorial, but image quality still can be improved a lot by cleaning the lens up. 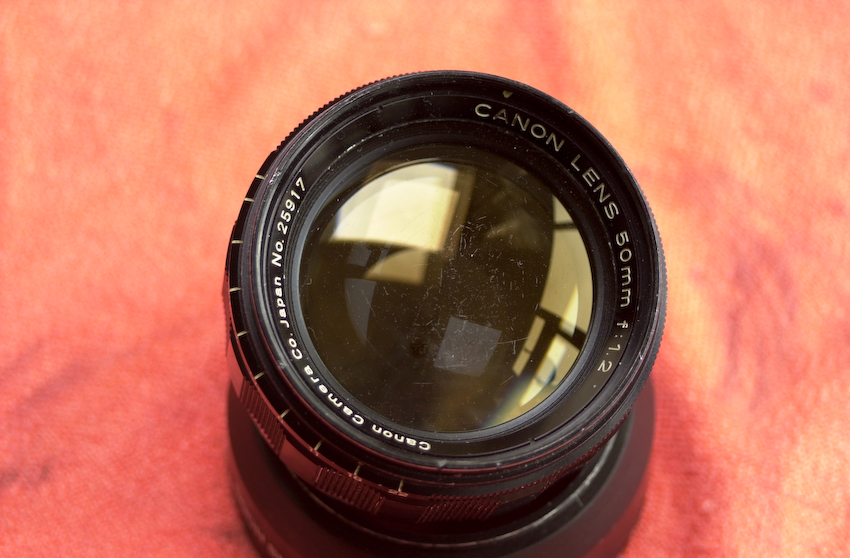 Wanna see how to get the most out of this lens again? Read on!

There's three parts here, in the first part the procedure to clean from the rear element only is explained, the second part includes front end cleaning for those more dirty apertures and elements, the thirds part shows how to tidily close things back up so that your lens will be performing flawless again. Please remember that I can take no responsibility for any mistakes you make or for things that do not work out with your specific lens. You proceed at your own risk, no liability implied or accepted!

Part I, Rear end only cleaning. Sufficient for most lenses.

In general, there are two problems with the Canon 50/1.2 lens: haze inside, and oily aperture blades. We are going to remedy these issues in one go. The Canon 50/1.2 is a very easy lens to clean. The whole lens is accessible with just the use of a spanner and a single small jewellers screw driver. It can be cleaned with a soft synthetic cloth, a blower and some Q-tips with Naphta, commonly known as lighter fluid. In this pictorial you can see some shots on how to proceed. Make sure you read the text inbetween as well, it's still a several hundred dollar lens you will be working on! 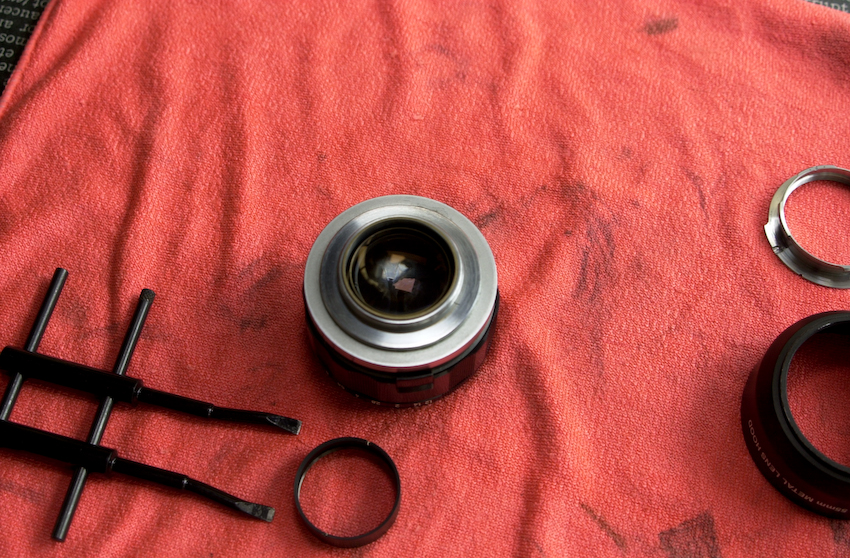 I started out with removing the black ring on the rear of the lens with the spanner. As you can see, I'm using an old synthetic soft cloth to work on, so that any dropped part will not bounce off the table, never to been seen again. We wouldn't want that to happen, right? After removing the rear ring, the whole rear end of the lens comes off in one piece: 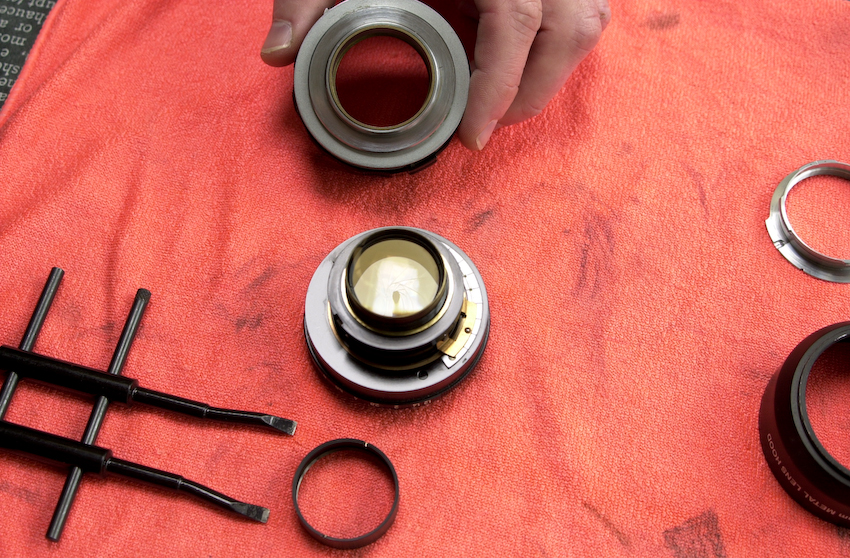 Leave all the other stuff on the rear end of the optical unit attached, there's no need to get any of it off.   Next, unscrew the rear element. It unscrews counter-clockwise. Just use clean hands to grab the black outside of the rear element. Make sure not to scratch it! 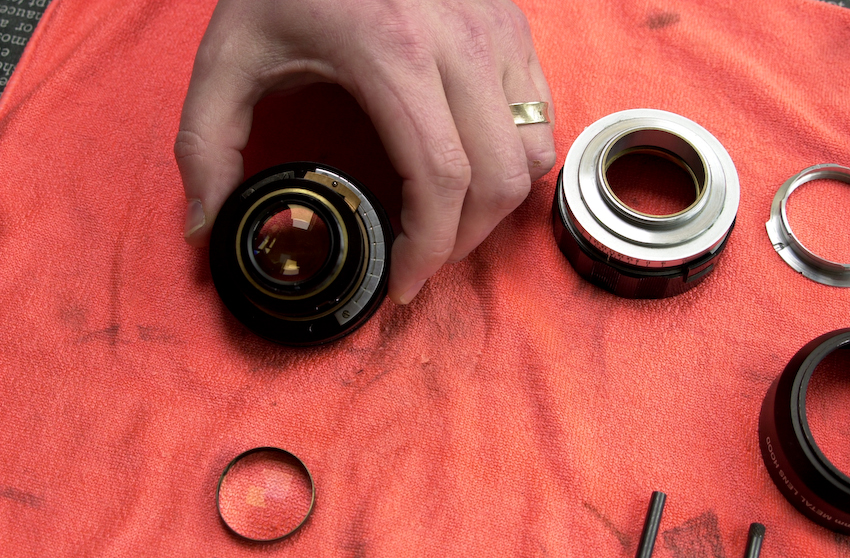 Here you can see the rear element lying on the cloth in front of the lens. Underneath that, there is another element, again with two notches in its retaining ring, so you'll need the spanner again to get that out. The brass ring on the rear of the lens is loose, it functions as a shim to get the optical element at the right distance to the film surface. You can take it off, or leave it sticking to the rear. 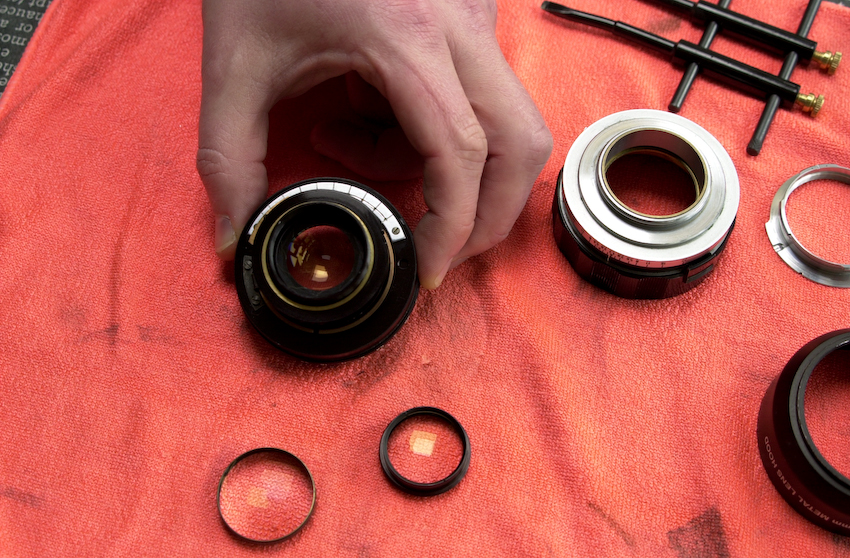 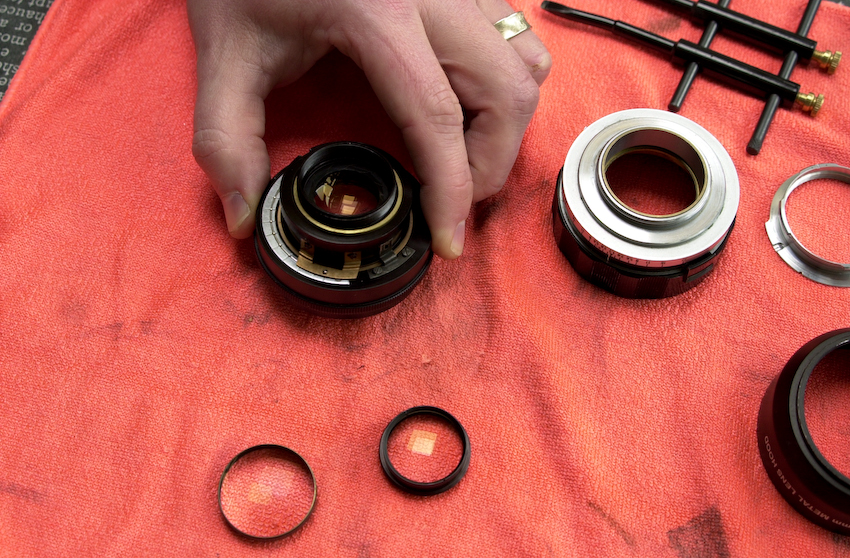 We have now reached the aperture blades, and cleaning those is easy as pie as long as you remember not to apply any force!!! If the aperture is oily but still moves freely (i.e. all aperture blades are looking like they should, nothing dislodged), a good clean will do the trick. In the next shot I have closed the aperture down completely. Use a Q-tip soaked in lighter fluid to moisten the whole aperture with. Make sure only to rotate the Q-tip, clockwise only! If cleaning counter clockwise, the Q-tip will grip the edge of an aperture blade, bending it for sure. Your aperture will be wrecked then! 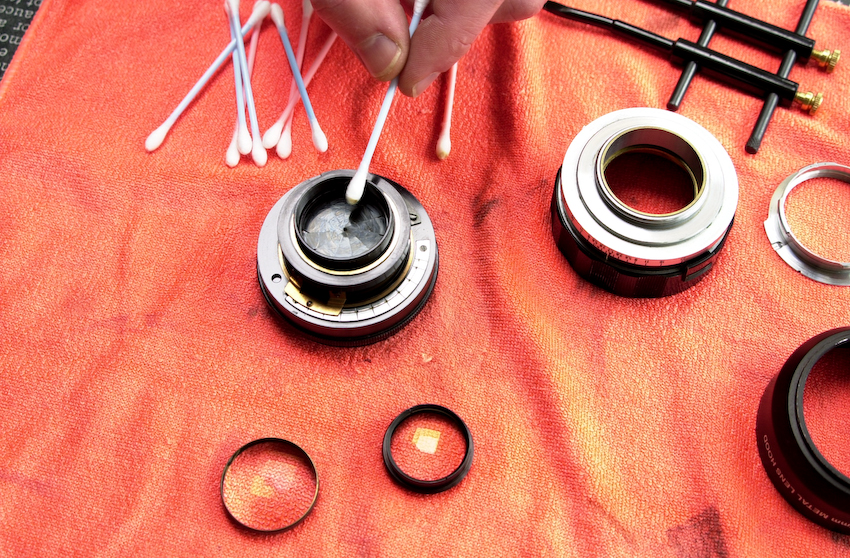 Let the lighter fluid sit for half a minute, then take the dry end of the Q-tip and again clockwise! clean the aperture. I usually repeat this procedure for some five, six times. Then, I wet the aperture again, but now carefully open it and close it several times. The lighter fluid will mix with the oil on the blades and dilute it. 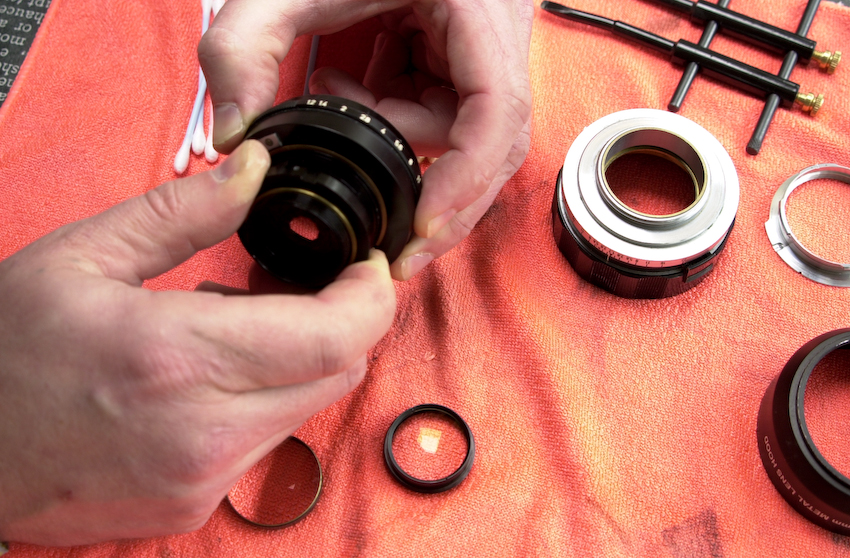 Make sure not to force anything, and keep an eye on the aperture while going through all stops, making sure nothing unusual happens. If it does, you're in trouble. This procedure allows for cleaning the aperture from the rear side only, which in many cases is sufficient. Repeat the aperture cleaning procedure several times more. I spent nearly thirty Q-tips cleaning this lens. 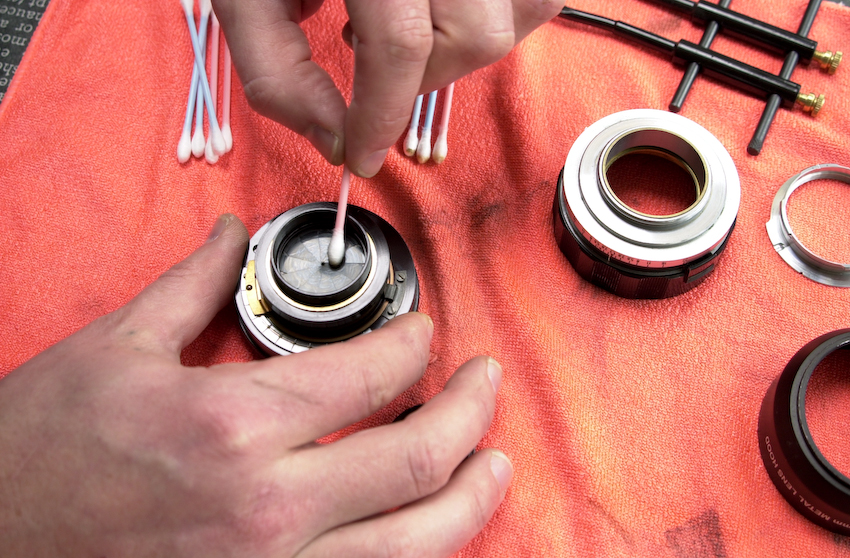 One additional trick: the aperture ring couples with the aperture through a narrow slot in the barrel. Here's what you do to clean any excess grease out: Use small pliers to squeeze the end of a Q-tip until it fits the slot. 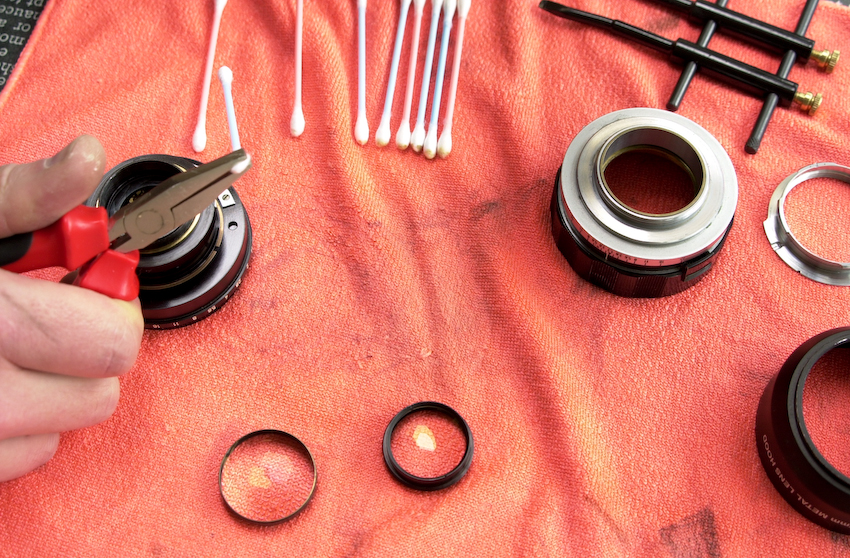 Now it fits the slot. 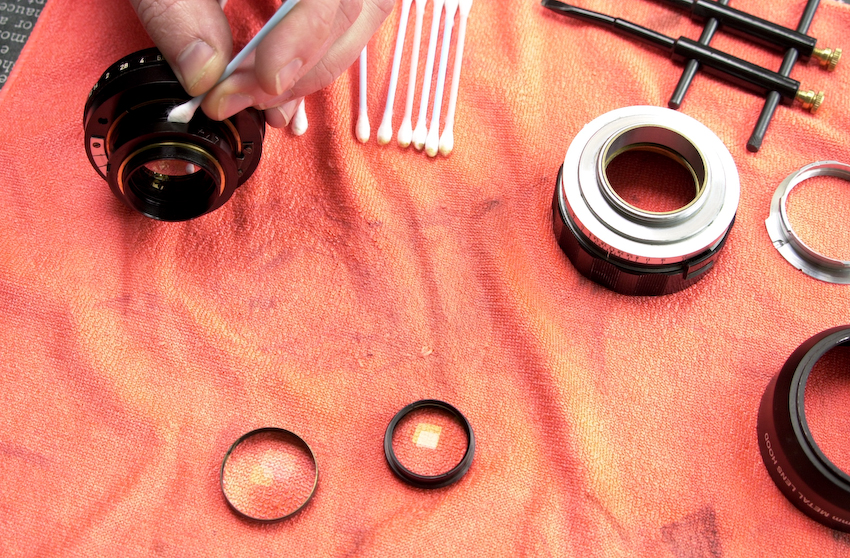 So far for the 'safe' procedure, cleaning from the rear end only. There's another approach, the more thorough one, which is also a bit more hazardous for the unskilled repairman. We're going to see the shots for that now. If you're uncertain on this, just scroll until you see a green cloth and you'll be safe again. :)

Look for a small set screw on the outside of the rim of the front element. Unscrew this small screw a few turns. Now grip the knurled ring for the aperture,look at the front element from the front, and unscrew it counter-clockwise. This might take some force. Do not use the spanner to remove the front ring on the lens, this is totally unnecessary. The front element and its retaining ring that is part of the barrel front end, unscrew as a whole. Now, all optical elements are out and the barrel with aperture ring, aperture and click stop spring remains. Fill a small bowl with 3/8 inch of ligher fluid, and soak the whole aperture in it. I used some motion to get the lighter fluid in the mechanism: 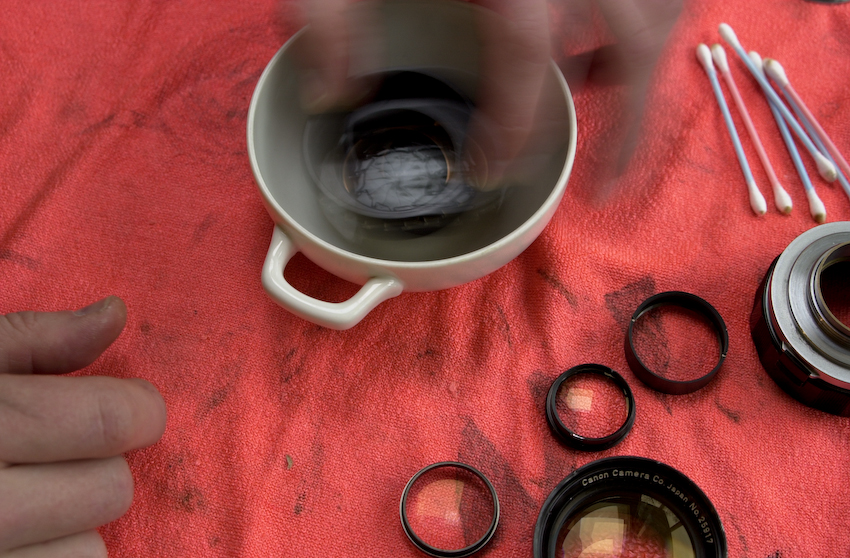 You might have found a brass ring coming off earlier when you removed the focusing mount, if it still stuck to the barrel it will most likely come off now. This ring acts as a shim, read in part I. There is also a brass ring on the inside towards the front of the lens. If you remove that one, the aperture comes apart. Since the pictorial would at least double in size when trying to address that problem, we'll just leave the ring nicely sit where it currently is, RIGHT!?!?

I only did this until the aperture was clean. Since there is more grease on the pivoting axels of the aperture blades, this is the moment to stop rinsing. There will be grease left on the aperture mechanism, while the blades are clean. Once all excess grease and oil is cleaned out with more Q-tips, leave the aperture to dry. The lighter fluid evaporates quickly.

Or, you can just unscrew the front element to clean the glass only of course, no need to clean the aperture preventively... Just sayin'!

Part III, getting it back together.

Now, start adding the optical elements to the focusing mount again. Screw the front element on, but not tight yet. Each element you can carefully clean with a synthetic soft cloth: 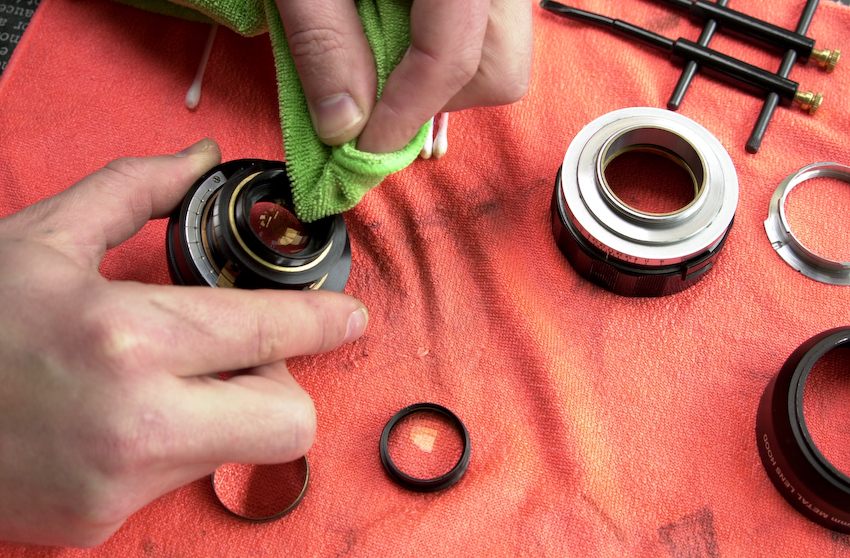 If you removed the inner and rear element only, clean each of them carefully and re-install. Use the blower to make sure no dust is sealed in between the lens elements. 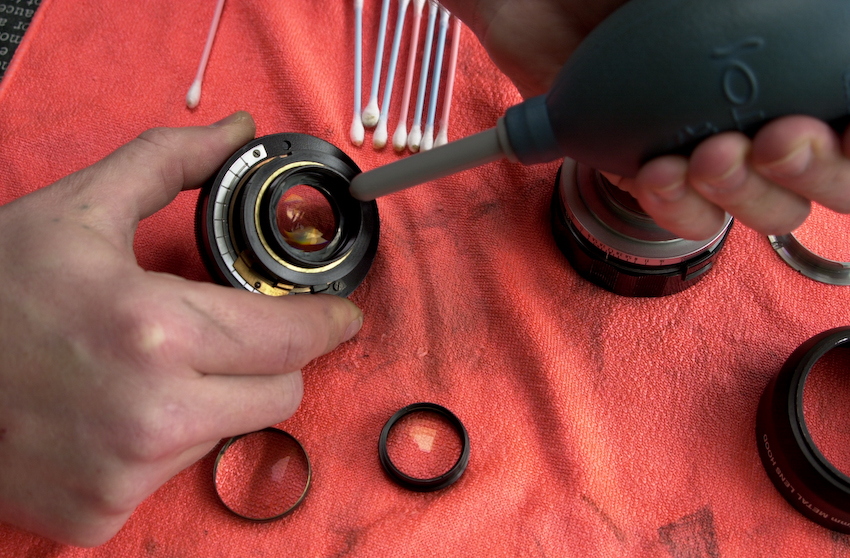 If you removed the front element as well, tighten this up once the inner and rear element are in place. Tighten the set screw, carefully. It is made from soft metal. The exact order of these steps made sure on my lens that there was no wobble in the lens barrel upon assembly, any other order left me with a wobbly lens. Now the lens is ready to serve my M3 again: 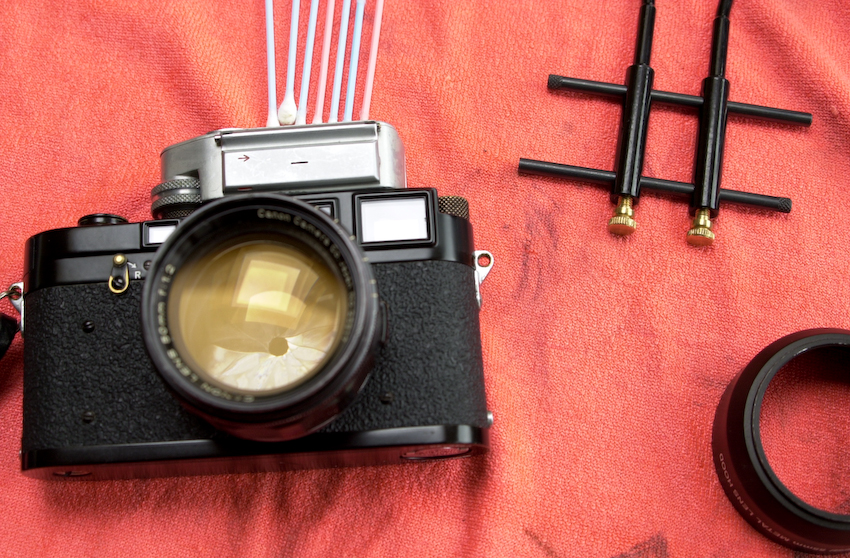 Eventually I sold the Canon 1.2/50mm you see here, and have often wondered why I did that... The M3 later was replaced with a Black Re-Paint M2. But that's all other stories!

For now, I hope I have helped you out!